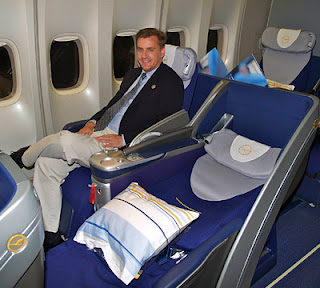 Each year around $200 billion of goods from Mexico pass into the United States. Now the trucks that carry those goods, and the people who drive them, will be allowed to enter as well.
A proposed agreement between Presidents Barack Obama and Felipe Calderon will end a two-decade-old policy that prohibits Mexican trucking companies from carrying goods more than 25 miles over U.S. soil. Products will no longer Business Tricks In Hindi have to be unloaded and reloaded onto American trucks at the 25-mile marker. The agreement will also end the retaliatory tariffs Mexico imposed in response to the trucking rules, which currently apply to $2.4 billion of goods.
The U.S. originally agreed to allow Mexican truck drivers to carry goods within its borders in 1995, as part of the North American Free Trade Agreement. Since then, however, it has stubbornly refused to honor this commitment. In the late 1990s, NAFTA determined that Mexico could institute punitive tariffs if it wanted, but the country initially held off. For a short time, a pilot program allowed Financial Times as many as 100 Mexican trucking companies to haul cargo into the U.S., but the program was unceremoniously canceled in a rider to an unrelated bill Obama signed in 2009. At that point, Mexico implemented the tariffs. The list of affected items has grown steadily, now including construction equipment, pork, fruits and vegetables, various processed foods, suntan lotion and Christmas trees.
The wide-ranging tariffs united a geographically diverse group of allies. Politicians in Texas railed against the harm the tariffs have caused for agricultural businesses.(1) In Washington state, apple growers worried that the new tariffs would be even more damaging than anti-dumping duties that were lifted only months earlier. The U.S. Meat Export Federation noted, with concern, that pork exports to Mexico dropped 12 percent in the first month after the tariffs came into effect.(2) The federation’s head, Phil Seng, said the 5 percent tariff effectively nullified the U.S.’ relatively low shipping costs, taking away its competitive advantage in pursuing Mexican sales. Meanwhile, consumers in Mexico paid the higher prices caused by the tariffs, and consumers across the U.S. picked up the bill for higher trucking costs on Mexican products.
I can think of only two groups who won’t benefit from the new agreement: Canadians and Teamsters.
Canada exports many of the same agricultural products as the U.S., including a number of the items that were hit by the tariffs. When the punitive tariffs artificially increased the costs of U.S. goods in Mexico, Canadians were able to swoop in. As U.S. pork exports to Mexico dropped, Canada’s rose sharply, according to the agriculture news site Brownfield.
But I don’t think the Canadians are going to try to derail the new U.S.-Mexico agreement. The Teamsters, on the other hand, might.
The Teamsters and other representatives of American truckers and trucking companies are the main, and often the only, backers of the existing policy. Their primary complaint, predictably, is that allowing Mexican carriers to operate in the U.S. would introduce competition, making it harder for U.S.-based companies to continue to pay the high wages demanded by the union. In the interest of at least appearing to have some concern for others, they have also argued that safety standards for Mexican vehicles and drivers are not strict enough.
“This agreement caves in to business interests at the expense of the traveling public and American workers,” Teamsters President James Hoffa told Bloomberg. He didn’t explain how, exactly, the traveling public will be imperiled by the agreement’s provision that Mexican carriers be held to slightly higher standards than their American counterparts.
A 60-day public comment period will precede the signing of the agreement, and I expect the Teamsters will spend every minute of it lobbying. But it probably won’t do them any good. While union support remains important for any Democratic campaign, Obama is also eager not to look like a union poster child as he heads into the presidential elections. The trucking issue offers him an opportunity to show that he is willing to stand up to unions, while allowing him to still actually help those unions representing workers in industries hurt by the tariffs.
Assuming all proceeds as planned, half of the tariffs will be lifted when the agreement is signed and the other half will be eliminated when the first Mexican trucking company receives clearance to roll over the 25-mile-from-the-border line. Then we will all be able to enjoy the fruits of NAFTA, including grapes and apples, delivered more efficiently and less expensively to consumers on both sides of the border.
Sources:
(1) The Wall Street Journal: U.S., Mexico Agree To Settle Truck Feud
(2) Brownfield Ag News For America: Retaliatory Tariff Slows Pork Exports To Mexico